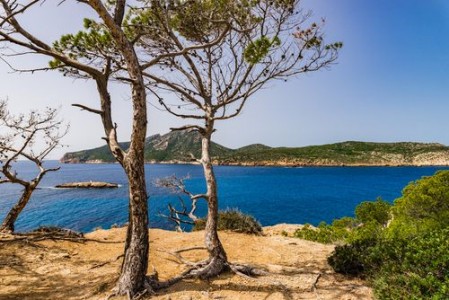 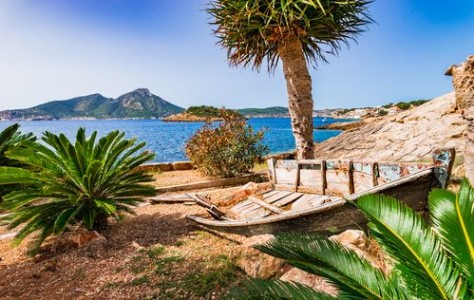 Next to the port of Sant Elm on the west coast of Mallorca, you'll find the uninhabited rocky island of Sa Dragonera, a protected natural park, offeringen beautiful scenery, a rich wildlife and lots of possibilities for hiking.

The island received its name due to its distinctive shape like a dragon's back: Towards the southwest, you can imagine its head lying in the water. Further advancing, a spine with 'scales' in the shape of the 312 meter high Puig des Aucells and the 353 meter high Na Pòpia. And finally, its soft tail at Cap de Tramuntana towards northeast.

Sa Dragonera has a total length of just 4 km, a width of almost 1 km and with the mentioned Na Pòpia as its highest point, where the former lighthouse Far Vell is located.

The island has lived a turbulent life: For centuries, it was a focal point for pirates and smugglers, and later - since the 18th century - serving as a resort of the former Spanish king who built a small castle at the tip of the island. For quite a long time fter that, the island was largely left to itself and became home to birds and reptiles, until the early 1970s when tourism reached the island. A consortium bought the island for the purpose of establishing 'nature holiday enclaves' with casino, restaurants, helicopter landing, etc. However, even though the plans were already approved, nature conservationists and environmentalists with broad support from the Mallorquins managed to postpone the construction over and over again. Finally, the investors decided to call it quits, and the Balearic government bought Sa Dragonera, choosing to declare the island permanently protected. Simultaneously, the two small islands in the area - Illa de Pantaleu and Illa de Mediana - were also declared protected park and nature reserves.

At Sa Dragonera, you'll experience a unique nature that is unspoiled, clean and offers a number of wonderful hiking and walking trails around the island. The sea around it is crystal clear, and, thus, it's a very popular place to dive and snorkel during the high season. In addition, Sa Dragonera offers a rare, rich wildlife and a famous cave - Cueva del Moro.

Sa Dragonera is one of Mallorca's truly unique natural experiences that can only be accessed by boat from Sant Elm and Port d'Andratx.